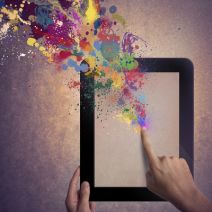 We all need a little magic in our lives now and again. For some, this means card tricks, or optical illusions that are designed to trick the eye into seeing something that isn’t there. For German magician Simon Pierro, dubbed the “Wizard of iOS,” it means taking a piece of consumer technology and turning it into a catalyst for his magic acts.

Yes, that’s right; this man turned an iPad into a magician’s assistant. Simon Pierro has quickly become a YouTube sensation, achieving well over 80 million views on his videos (and still counting). He’s well-known throughout the world for his unparalleled digital magic, where he combines consumer tech with basic illusions to pull off exceptional, and truly astounding, magic tricks. He pulls objects off the screen, transports them to physical objects, and even pours a glass of milk on his friend’s head.

If you’re not sold on Pierro’s magic, check out this video he put together to show off some of “the new updates to iOS 5.”

Please note that the iPad can’t actually let you pull the sun out of the sky and stick it in your pocket, and Apple doesn’t give you an infinite supply of tennis balls. It’s also not advisable to use your iPad as a tennis racket, but sometimes it can’t be helped.

In this video from The Ellen Show, Pierro pulls some of the same stunts, in addition to some new ones, in front of a live studio audience.

And here, Pierro runs his own personal keg of frothy German beer at an Oktoberfest event in Munich. We bet that some of the spectators are suspecting they’ve had a few too many drinks.

We don’t know how Pierro is able to perform these iPad magical miracles, and frankly, we don’t need to know. Sometimes it’s better to just suspend disbelief and go along with a trick, rather than try to debunk it. The only thing that’s on our minds is whether or not Pierro can accomplish the same tricks using a Windows Surface tablet.

We might not be official iPad magicians like Pierro, but we certainly know our way around technology. In fact, we know a little magic ourselves. Modern managed service practices have given birth to what is known as remote monitoring and maintenance services, which let us administer security updates and patches remotely. This means that you can experience all of the wonders of up-to-date technology without an on-site visit from our professional IT staff.

Contact IT Management Solutions at 978.291.8125 to find out more about how we can spice up your technology infrastructure. Your IT will run so efficiently, it’ll be almost like magic!

Posted by Pedro Nunez on Wednesday, 25 March 2015 in Miscellaneous